Look out for us on

Click here to read more about NETA at Home

Look in Contacts for more information

When I came around from the brain haemorrhage in January 2002 life was going to be very different. I spent 4 months in hospital remembering very little of all the friends who visited me and slept an immense amount of time. The worst outcome for a teacher was not being able to speak!

I went to a speech therapist at the new hospital in Hexham and over the next few years as my speech improved I became very fond of my ‘teacher’ also called Jill!

More milestones along the way have been:-

Being able to read again - for about 5 years I had to rely on audiobooks but one day I suddenly realised I had the ability to move back the next line and lo and behold I was reading again!

Getting back to being able to cook well. Slower, in the morning before 3pm, when my concentration goes, with all sorts of gadgets. 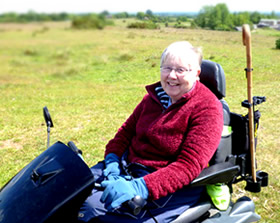 Getting my Tramper - off terrain ‘scooter’ named Delilah - a feisty lady which has given me such freedom and enabled me to do some quite difficult rambles I belong to a national organisation who although we can’t walk we still enjoy adventurous rambles. This year I managed to do one without Hugh! We hadn’t gone far when we passed on foot Alan Bennett the actor and playwright!

I really enjoyed the ramble over very rough terrain chatting to various friends in their machines and ending with only 10% of power left I now view my life in two separate sections, before stroke and afterwards I enjoy being a Trustee with Neta helping out where I can always promoting the charity and helping it to continue being successful.

Jill Williamson talking about how stroke has affected her life

Jill and I had known each other for some time when we got married in April 2000. By New Year 2002 we had decided to retire later in the year and enjoy the new opportunities that would provide On the morning of January 9th 2002 Jill set off early as usual on the morning for her job as Head teacher of Trinity School in Carlisle. She was perfectly fine and I went over to work at the Airport. At 4 o’clock I had a phone call to say Jill had collapsed and been taken to Hospital. I immediately went over only to pass Jill on her way to the RVI. I was told she had a brain haemorrhage. She had been put into a deep coma and sent to the Regional Neurology Unit. All our 4 children and their partners immediately came up from London . We had a very anxious time as she remained in a deep coma in the Intensive Care Unit. The first attempt to bring her round was abandoned as too risky. Our real fear was that she would become a vegetable. After two weeks the second attempt to bring her out of the induced coma was successful and we began to find out the scale of the effects. She was stabilised in the RVI before transferring to Hexham for rehabilitation She returned home in May

At that stage her speech was limited to ‘Yes’ and ‘No‘. She began to learn to walk again enough to get around the house but a combination of the extreme right side weakness, poor balance and loss of lower right side vision made her walking very slow.

Unfortunately speech therapy was limited to once a week which bearing in mind the extent of her speech lost seemed woefully inadequate. The Stroke Association put me in touch with the Aphasia Centre and we went for assessment. It took three sessions to convince the centre that Jill could benefit from the intensive course. Since then her speech has moved from strength to strength and slowly her other ‘executive’ functions have improved so she can read, write, watch television, cook etc. For me once she had started recovery then I focussed on the numerous practical problems that had to be faced. It was a challenge. I also concentrated as a first priority in keeping Jill occupied to minimise the time to dwell on what fate had decided would be her new life. With occasional understandable lapses she has kept very positive ever since.

I was being told that I needed to take care of myself and from the start I ensured that I carried on with some of my own interests, golf, Lions and volunteering with Relate as a counsellor. This enabled me to keep things in perspective and to prevent any feeling of resentment at the huge changes that had to take place in my life.

Over the last twelve years our life has very slowly changed as Jill regained more and more of her old self. She has taken back running the home- shopping, washing the clothes, baking bread and much of the cooking ( I still make a mean breakfast ) although I sometimes have to act as ‘sous chef’ when more than one hand is needed! She is also able to enjoy spending times with friends and our children and grandchildren. This has required us to travel to many different parts of the world, Sweden, Shanghai, Melbourne Singapore and Rio de Janeiro. We bought Jill an all terrain buggie and we join in rambles around England and I have organised a number of rambles in the North East including in the Cheviots and on Hadrian’s Wall. I am also chauffeur (sadly despite requests still without a hat)! taking her to her many interest such as being a trustee of NETA and and a longstanding member of the Orpheus Choir in Hexham. I was kindly ‘volunteered’ by Jill to abseil down the Souter Lighthouse for NETA.